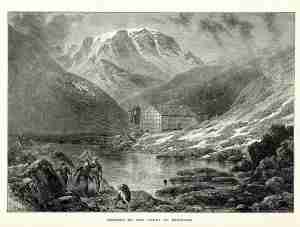 Although the true origins of the Saint Bernard breed are not well documented, some aspects of this extraordinary breed are known. Authenticated facts combined with reasoned speculation are believed to best describe the development of this magnificent breed. 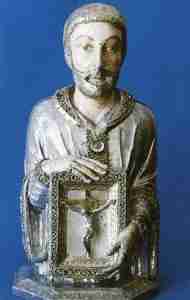 The Monastery and hospice were founded by Bernard de Menthon, an Augustine monk, in the middle of the eleventh century (no exact date can be found).  These edifices were located in the only pass through the Alps between Italy and Switzerland. Being the site of heroic rescue tales, it was later named the Great Saint Bernard Pass to differentiate it from the Little Saint Bernard Pass that is between France and Italy. The altitude at the Great Saint Bernard Pass is a little more than 8,000 feet above sea level. As it was snow free only a few months during the warmest part of the summer, it was very dangerous for foot travelers journeying to or past the hospice. Being caught on foot in that difficult terrain during unexpected inclement weather was often fatal, but those who braved that treacherous territory were comforted to know that the hospice was staffed with dedicated monks and their special dogs.

“Nothing was written about the hospice dogs during the first 700 years of their existence.”

Nothing was written about the hospice dogs during the first 700 years of their existence. Many stories surround the formation of the breed. The earliest known depiction of the breed was two paintings done in 1695. Some attribute these to the work of a well-known Italian artist named Salvatore Rosa. Each painting shows a well-built shorthaired dog with a typey head, a long tail, and dewclaws. One dog is splash coated, while the other dog is mantle coated. One expert, Professor Albert Heim, concluded that these paintings show a breed that had been in existence for approximately 25 years. Thus, the most accepted estimate is that the breed originated sometime between 1660 and 1670.

The dogs which were bred consistently at the hospice from the 1660’s until the period represented by the paintings of 1695 came from the Swiss valleys near the hospice. These dogs were likely descendants of the mastiff style Asiatic dogs that were first brought there by the Roman armies during two war periods. Valley dogs existed for centuries without being known as a particular breed. The typey dogs developed at the hospice were derived from those previously existing in the countryside of Switzerland.

From the available written records, it seems that the unique lifesaving work of the dogs began about the year 1700. Before that time, it is assumed that these dogs served as watchdogs and companions to the monks during their winter periods of snowbound isolation. No written records clarify how the rescue tasks of these dogs evolved. It appears that the dogs initially accompanied the monks on mountain patrols after bad snowstorms seeking unwary missing or trapped travelers. The dogs seemed to have had an uncanny sense to detect impending avalanches, consequently the monks wanted the dogs to accompany them while they traversed those perilous footpaths. Somehow the dogs learned rescue techniques from the monks.

Eventually male dogs were sent in unaccompanied packs of two or three to seek lost or injured pilgrims. (They thought this work was too arduous for the bitches.) Often the dogs had to find people buried in the snow, dig through the overlaying snow, rouse the traveler and lie atop the wayfarer to provide warmth if the traveler was unable to move. Meanwhile, the other dog would return to the hospice to alert the monks that they needed to rescue a trapped pilgrim. Travelers who could still walk would be led back to the hospice by the dogs. The instinct to dig to people buried beneath snow and to rouse those laying in snow is still evident in the breed today.

“The dogs had serious work to accomplish”

The dogs had serious work to accomplish; they had to work as a team to save wayfarers in trouble. Therefore, the monks made no concession for male aggression toward each other or toward any traveler. This is the same temperament that is implicit in the breed today.

During the winters of 1816, 1817, and 1818, the snowstorms at the Great Saint Bernard Pass were especially severe, and many dogs perished while doing rescue work. As a result, the Saint Bernard strain living at the hospice came close to extinction. The records say that the monks completely replenished the strain two years later with similar animals from the nearby valleys. Rumors persisted that the remaining dogs were crossed with Great Danes or English Mastiffs after that near extinction, but no records exist to confirm that these breedings occurred at the hospice. 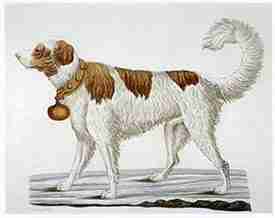 at the hospice beginning in 1830. Why were these crossings made 160 years after the breed’s origin and after so many years of success using only the shorthaired dogs? Because many dogs perished during the more severe winters, the monks reasoned that the long hair of these dogs would better protect the Saint Bernard against the cold. For the most part, this idea did not bring the results expected.  Ice formed on the long hair during the lengthy circuits through the high snow, and the weight of accumulated ice and snow very quickly incapacitated the dogs. Consequently, they could not use longhaired dogs for rescue work. Soon the monks returned to almost exclusive use of shorthaired dogs for mountain work and began to give away all longhaired puppies. (It is written that the Leonbergers, given to the Monks by Henirich Essig, were used in rescue work and the prior wrote and told Mr. Essig they worked well or better than the St. Bernard). The Swiss recipients of these puppies used them for breeding with their own dogs, also resulting in litters containing both longhaired and shorthaired puppies. Selective breeding done by the most dedicated Swiss fanciers resulted in the return to the original hospice type dog with only the length of hair differentiating the shorthaired and longhaired varieties. 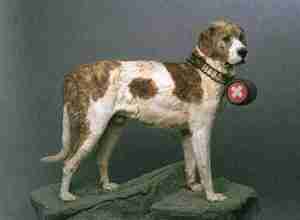 During this time, the breed was still without a name. It was the much-traveled and dog-loving English who first recognized this outstanding breed of dog in Switzerland. They called them Hospice Dogs, Holy Dogs, Alpine Mastiffs and Saint Bernard Mastiffs. Others called them Mountain Dogs, Monastery Dogs or Swiss Alpine Dogs. Many Swiss called them Barry Dogs as a tribute to the famous hospice dog. Barry der Menschenretter was reputed to have saved more than forty travelers during his working lifetime. Finally, in 1880, it was agreed to call the hospice dogs Saint Bernards.

The first record of planned breedings outside the hospice began in Switzerland in 1855 with the efforts of Heinrich Schumacher. He originated the first stud book for Saint Bernards and worked to maintain the original hospice type. Herr Schumacher and his like-minded friends bred to hospice dogs and supplied dogs to the hospice. A high demand existed for these distinctive dogs especially from the English. Many people uneducated to the original characteristics of the breed began breeding Saint Bernards throughout Switzerland, resulting in detriment to the breed. To preserve the original breed type, the Swiss Kennel Club was founded in 1883 and adopted the first Swiss Saint Bernard standard in 1884.

The English had imported hospice dogs since 1820 but had been less conscientious in their breeding practices than the Monks or the dedicated Swiss breeders. Because the English Saint Bernard was noticeably different from the hospice or Swiss valley dogs, the English wrote their own standard in 1887. The English Saint Bernards had been crossed with the English Mastiff and were affected by the pressures of popularity beginning in 1863. Little resemblance to the original hospice type remained. Saint Bernards from both England and Switzerland were being exported around the world, and two different breed types existed with the same name. As a result, there arose a controversy regarding which country had the correct type and was the true breed authority. In 1886, an international congress was called in Brussels to decide the matter, but it was unable to reach a consensus. Another international congress was called the next year, in 1887, in Zurich, and it concluded that the Swiss standard would be used in all countries except England. 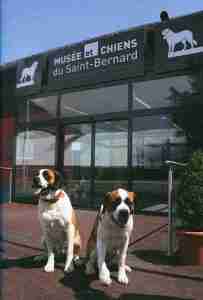 Visit this fascinating site to learn more about the history of the Saint Bernard. Click here to go to the English pages. Information includes: The Origins of the Dogs, The Dogs from the Hospice, The Legendary Barry and more. Special thanks to Dr. Marc Nussbaumer, Naturhistorisches Museum, Bern, Switzerland